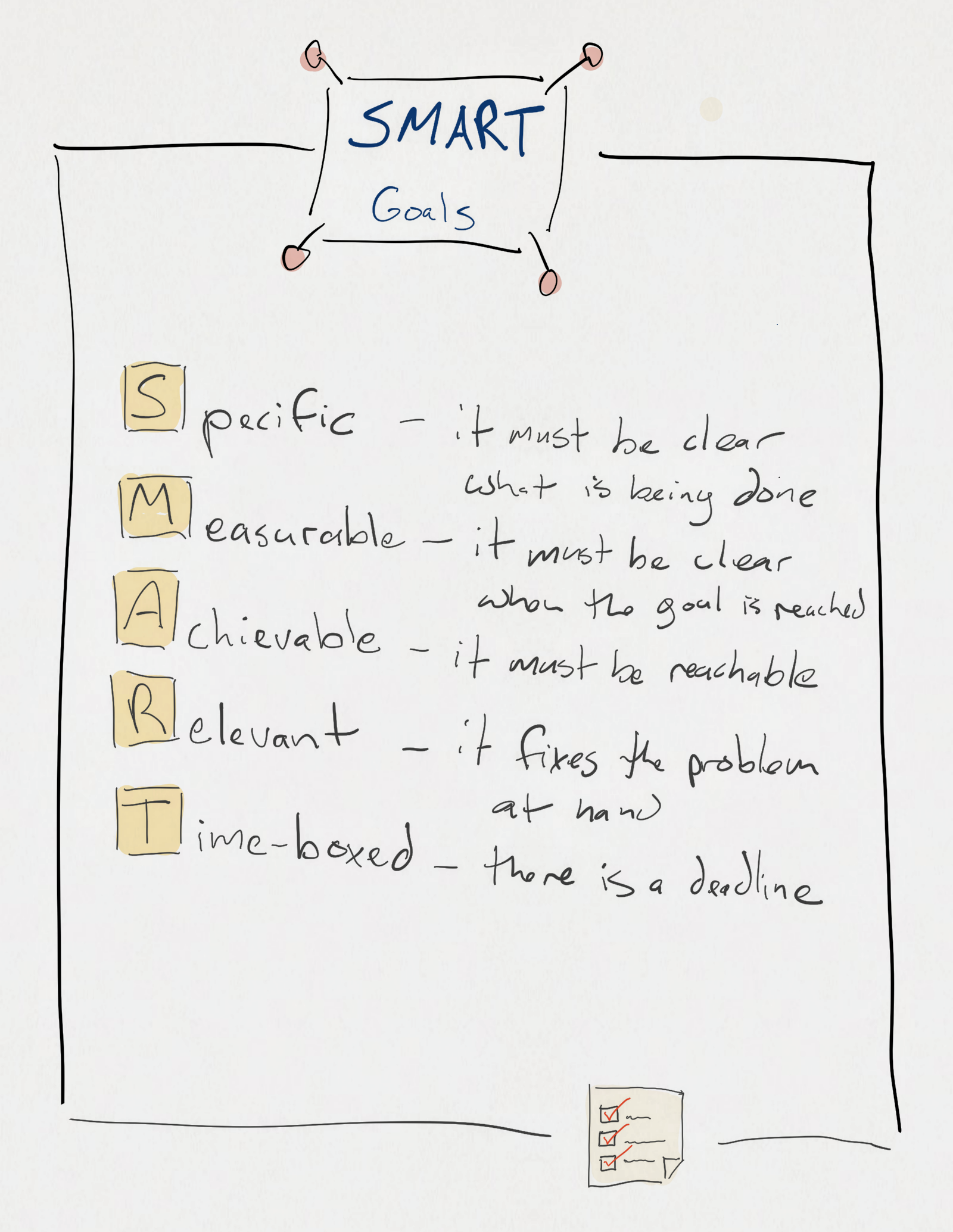 My local Rec Center has an indoor track that runs around the edge of the building just inside their giant two story windows. Driving by, you can see people walking and running on the track. Every morning, I pass by on my way to work and see one or two people engaged in their morning routine. Today, I saw at least half a dozen. It instantly hit me: It’s New Year’s resolution time.

Unfortunately, most of those people won’t be there in a few weeks. And I hate to say this, but the statistical likelihood of your New Year’s resolution failing is pretty high. Mine too. (Math is harsh.) It’s simply a fact that most new year’s resolutions fail, a whopping 92%, according to Forbes. There are two primary reasons for this.

The first, and the one that I’ll talk about today, is that we don’t make the right kinds of resolutions. We say things like, “I’m going to eat better,” or “I’m going to read more.” The problem with these kinds of goals is that they’re not SMART.

SMART is an acronym that helps to define better goals.

Setting goals based on these criteria ensures that you are solving the problem at hand, which naturally leads to specific steps you can take to achieve the goal. SMART goals also ensure that you know when you’ve reached your goals. You’ve either reached them or you haven’t. There is no wishy-washy middle ground. This is important for a couple of reasons. First, it gives us a psychological boost because we know that we will either succeed or fail. And our minds crave that dopamine rush from an accomplished goal. It also allows us to put our goals behind us and focus on new ones once we’ve achieved them.

If we focus on our “eat better” goal as an example, it only meets one of the criteria.

It’s not a measurable goal either. That is to say that there’s no point at which we can declare the goal reached. “Eat better” has no perceivable end.

We must be able to reach our goal. If we determine that “eat better” really means “eat less,” we can’t limit ourselves to a peanut every day because it’s just not realistic.

Ah, finally. We’ve reached a criteria that works. Our original goal of “eat better” is totally relevant. Presumably, the problem we’re trying to solve is health related and diet is an important part of health. Of course, if the problem you’re trying to solve is not having enough money, there are probably better ways to solve that problem. But, generally speaking, this is the piece that comes most naturally to us. We all know that eating better is a ridiculous way to save money. This piece is more important to focus on when dealing with more complex problems where cause and effect are less obvious.

Finally, we want our goals to be time boxed. We want to set a date where we can look back at our measurements about our specific goal and say that we either have or have not achieved that goal.

Now that we’ve established a set of criteria for our goal, we can re-state our goal using SMART criteria. Perhaps it would be something like: “I will reduce my average daily caloric intake by 5% by the end of January.” While this goal is more of a mouthful, no pun intended, and it doesn’t take us through the entire year, it satisfies our SMART criteria.

Since we’re just barely a week into the new year, You’re probably still going strong with your New Year’s resolution. You might be thinking to yourself, “I’m good. My resolution is going well.” It probably is. So far. But remember: 92%. If you’re faltering - or even if you’re worried you might falter on your resolution - you might want to look back at it and ask yourself, “Is my resolution SMART?” Even if you’re not faltering yet, reevaluating your resolution and applying SMART goals will help you beat the odds.

I mentioned earlier that there were two primary reasons that people fail with their New Year’s resolutions. Next week, I’ll talk about the second, which is failure itself and how to give ourselves room to fail with retrospectives.